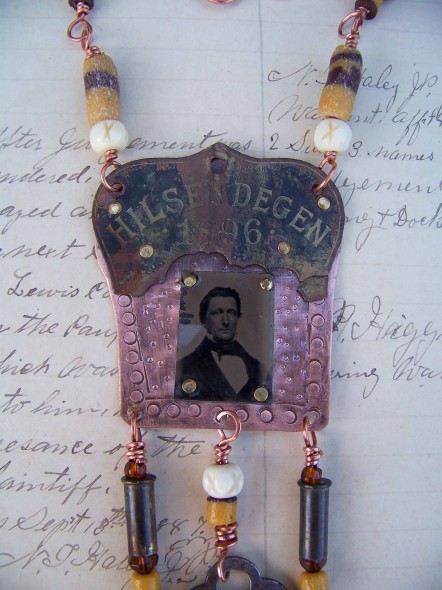 On one of my treasure hunting forays, I stopped at a shop that had attracted my attention for a couple of years, but I was always in such a hurry when I passed it. This day, I had time to spare so I gave into my curiosity and pulled in. At first, I perused the whole shop and didn’t really find anything promising. Then the owner asked me what I was looking for. I replied that I wanted small, rusty, aged things that most people would overlook. He showed me a tray of objects and said that he had found them over the years while he was metal detecting. Bingo! I dug through the objects for about half an hour and randomly asked him about the more interesting finds. One of them was this curious piece of metal with a name and a date. He said that he had found it in a creek next to a cave where a gun battle had taken place between some criminals who were hiding out in the cave and the sheriff and his deputies. He assumed that this had belonged to one of them.

I had kept this piece in my studio for about a year, wondering what to do with it. A couple of weeks ago I had bought a couple of very vintage jewel tintypes. One was a woman (you will see her in the next post) and one was a man. I was pondering how to use the man’s image. While lying in bed a couple of nights ago, it came to me! He was the deputy who lost his badge in the gun battle. The story was completing itself. Add a couple of bullets, a key for handcuffs, and a tiny gun and the story comes together.

So…meet Deputy Hilsendegen, wounded in the line of duty, but not mortally. The criminals were brought to justice and he was taken home, (after being patched up by the town doctor) to his loving wife…hmmm…the other photo in the next post. 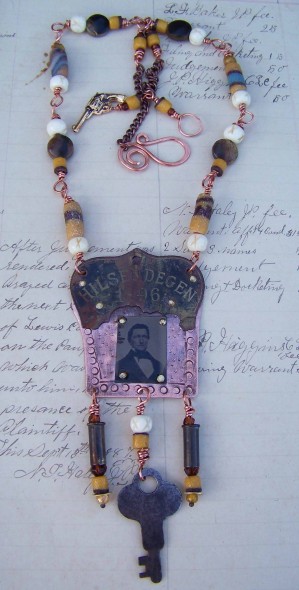