Posted on September 1, 2008 by Sherry Scheitel 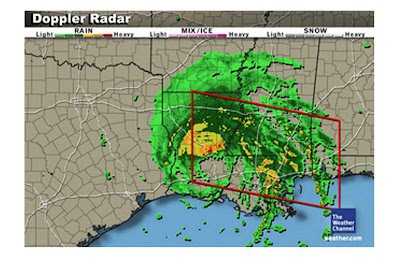 I just got back from a family reunion at Gulf Shores, Alabama at 1:00 this morning. There was a mandatory evacuation because of Hurricane Gustav. We were supposed to leave today but had to cut it short. The trip was a blast in spite of the evacuation. There were 45 of us in one huge house! What an amazing gathering of people! I will post more later, but I wanted to tell about the coolest thing that happened there. On Saturday night the ocean was glowing! There is a phenomenon called bioluminescence.Here is an explanation taken from http://mips.stanford.edu/public/abstracts/hastings.pdf

“Ocean “phosphorescence”, commonly seen at night when the water is disturbed, is largely due to the dinoflagellates; they occur ubiquitously in the oceans as planktonic forms, responding to mechanical stimulation when the water is disturbed by emitting brief bright light. Light emission may be seen in the wake of a large ship for some 20 miles. About 20% of marine species are bioluminescent and many are photosynthetic. “ Red tides” are transient blooms of individual dinoflagellate species. Phosphorescent bays (e.g., in Puerto Rico, Jamaica) are persistent blooms of this type.

I tried to take pictures of it but couldn’t capture it, but I did find a Youtube video that shows what happens when you splash in the water. All of us ran down to the ocean and started swimming and splashing with the kids. I have always wanted to see this phenomenon but thought it only happened in tropical places but apparently it is fairly common.
I was so thrilled to finally experience it. That was one of those “bucket list” experiences.

One Response to Evading Gustav