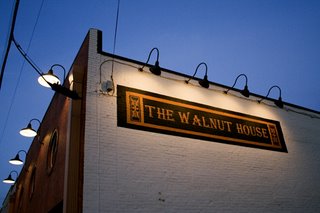 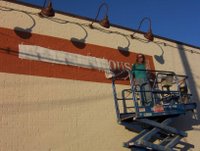 Well…this is a little bit different kind of job than I usually do. I got referred to a man that wanted a mural. I was thinking some kind of scene or something, but it turned out to be this sign. I designed the logo for him and he liked it, so thus began my adventure. The sign is about 15 feet off of the ground so I had to use a scissor lift to get to it. For a person who doesn’t like heights, that was a stretch. I was apprehensive about the height but once I got up there, I loved it. It was such a blast! So many curious people came by and talked to me about the sign. It was like an art performance with an audience passing by all day. These photos are in reverse order. The hand points to where the entrance for the small studios is. It is a little shiny because I took it with a flash before the paint dried. The finished photo was taken by Kim Huff, the owner of the art gallery in the building.
In addition to the gallery, the building houses a recording studio an, and several small studios that are rented by various creative people. The gallery owner, Kim Huff, may put some of my work in her studio. This is at 116 N. Walnut St. in Murfreesboro, TN. The gallery is scheduled to open at the beginning of December.