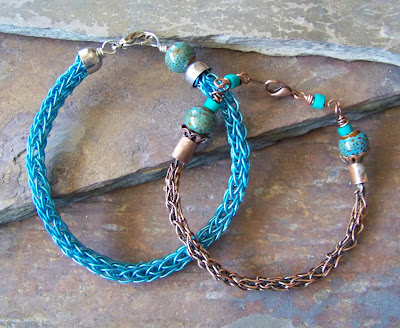 One of my New Year’s resolutions is to learn something new as often as possible. I had always been intrigued by Viking Knit, but it looked just too complicated to learn on my own without an instructor. “Viking knitting” is not actually knitting in the way you might think (i.e. with two needles), but is actually a type of weaving. Chains are made from long pieces of wire that are worked by hand into interconnecting loops. Examples of these chains have been found at various archeological sites in Scandinavia dating back to the 8th century A.D (the Viking era). Similar chains have been found in other areas of the world, so the technique may not have been unique to the Vikings. (Quote from Janra Jewelry)With one of my “geeky side” interests being archeology, that makes this technique even more appealing. I decided to do a search on YouTube to see if I could find any instruction that would make this seem less daunting. This is one of the videos that I found that made it seem fairly simple.
http://www.youtube.com/watch?v=wfsyTn9XCsE

I first started with some plastic coated 20 gauge wire which worked really well because it is less prone to tangle. When you are working with 10 feet of wire, that is a big consideration. After success with that, I tried 20 gauge copper wire which was a little trickier, but not too difficult.
Above are my first two attempts. Each chain took around 3 hours to complete, but most of that can be done while watching a movie or riding in the car. It is a very portable project.

It just amazes me, the wealth of information that is on YouTube. I plan to post other newly learned skills in the future. I challenge all of you to see what you can learn too.

2 Responses to Learn Something New